I ended up making a full turkey dinner with sweet potatoes for the boy, baby carrots and peas, mashed potatoes for #1 child and couscous for #2 (I'll get into the separate feeding issues another time). I also did some whole wheat biscuits and luckily I already had an apple pie I'd made and frozen in Sept during apple season. In between all of this I had to roast my brussel sprouts for the week as well as a big salad. Felling quiet tired but on the bright side, the rest of the weeks meals are easy and relaxed with most of the prep work already done. I highly suggest doing this on Sunday for many reasons but I like being able to experiment with dishes during the week so if my salad and veggies are already done this it's easy to get adventurous with the main and not spend all night doing it. My stock is bubbling and I'm already contemplating our soup for the week. I'm thinking maybe a pea soup tomorrow and an asian one later in the week. We're all very excited about the men's Canadian hockey team winning tonight and now it's time to watch the closing ceremonies. Enough cooking for one day :)
Posted by Michelle at 5:37 PM No comments: 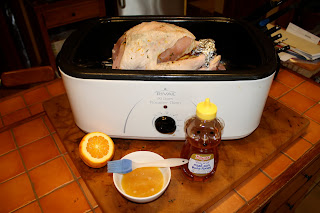 After finding my cheap bird yesterday by accident I decided to dethaw it right away and cook it for Sunday dinner. This morning I picked up some fresh sage leaves which I think are a classic turkey herb and decided to make a simple wet rub with it using orange rind, olive oil and salt. After chopping it all up I loosened up the turkey skin and spread the mixture on the flesh. I then sliced up the orange and added it with the rest of the sage leaves to the cavity of the bird. Then I melted some honey and added the juice of the orange to it in order to baste the bird a few times while roasting. Pretty simple stuff really.

I have a really cool roasting pan that I picked up a few years ago at Costco and it's proved to be my favorite way to roast turkey's or a big chicken. I've also seen them at Walmart and a few of the bigger chains for $60-150.00. First of all they leave your oven free for all of the side dishes and desserts you still have to cook for dinner that day but more importantly, it roasts the turkey quicker than the oven because it's a more 'contained' heat which I find leaves it juicier and more tender almost like a crockpot would but you still get the roasting effect. I also baste the bird much less (maybe 3 times) because I don't like to lift the lid and let out the heat and steam. The best part of the roaster though is when the turkey is done and removed, I leave all of the juices in the roaster and then make my stock as soon as we're done dinner. Add all of the bones, skin and neck along with your stock veggies back into the same pan and cover it leaving it at about 250 degrees for 3 hrs. You can strain it then and leave the stock all night to get your fat to float to the top for easy removal. I'll let you know what kind of soup I make this week with the stock. Always planning ahead! I think I have a frozen apple pie made in September in the freezer for dessert.
Posted by Michelle at 11:32 AM 2 comments:

It's a chilly and damp Saturday afternoon. Perfect for staying inside and baking comfort food. I'm not sure why but I craved something hearty with seeds and nuts so I decided to use up my 9 grain mixture. First came the 9 grain muffins

and then since I no place to be most of the day, I made my bread. 2 loaves of whole wheat for the girls and 2 loaves of grainy bread for dh and I. I started making bread about 7 years ago, first in a bread maker (which never impressed me) and then in my fancy dancy kitchenaid which as far as I'm concerned is the best kitchen gadge of all time with only the fridge and stove beating it. I am now on my 2nd kitchenaid and not because the first was not also very excellent but because of was ugly. I bought the first one that hit the market which was factory grey metal and had no bells and whistles. After realizing about 2 years into owning it that I would never ever part with this appliance I decided to upgrade to the ferrari candy apple red one to match my kitchen. 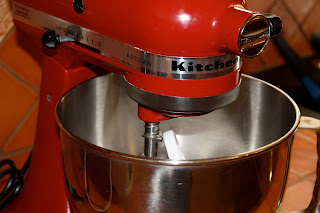 I realize how non frugal and snobby this sounds but my old one went to a very good home and my new one is not only kitchen jewelry but it is used daily so money well spent I believe. Oops I digress again, I was talking about bread making. I'm a very good bread maker but I can't take all the credit which bring me again to the Kitchenaid. The hardest and trickiest part about making good bread in my humble opinion is the kneading and this machine does 90% of it for me. Not that I can't make bread without it but I do consider it to be my buddy in the kitchen. As I type the kitchen is filling up with the best smell in the world, fresh baked bread. This batch came out perfect but they don't always. Sometimes they are huge and overflow a bit and other times they come out heavy and dense. Either way the taste is like nothing you can buy in the supermarket and their slight imperfections go unnoticed in my kitchen. 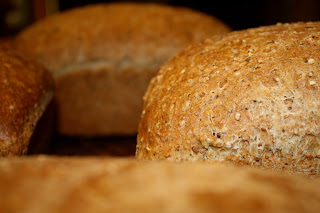 So it's the morning after my small internal debate over giving up meat once again and all because of Food Inc.. Problem is, I had to go grocery shopping this morning and one of the local stores had grain fed turkeys on sale for .99 a lb. That's really cheap so how could I not buy one? a really big one? Turkey is my most favorite after all and like I said, it was cheap. So maybe I'll think about this again next week because that's about how long it will take to finish all of the leftovers. I should make my own documentary and call it 'Food guilt".
Dh and I were talking last night about how nice it would be to have a small hobby farm where we could keep some chickens and a few turkeys (free roaming of course) and a large garden. Maybe some fruit trees and a gazebo with grape vines that produce huge purple ones for jelly. Fresh eggs every morning and my very own herb garden in a small green house for use all year long. I already make trips to the farmers market a few times a summer for large quantities of peppers, tomatoes, basil and berries for preserving so I've got that part down pat. As for having a green thumb and feeding animals....well I'm a fast learner. I do have a dog you know.

Our Labradoodle Daisy
Posted by Michelle at 8:38 AM No comments:

It's February 25th and I'm finally watching Food Inc. I rented it after trying unsuccessfully for 2 nights to dowload it for free. Then yet another obstacle for the next 4 nights has been the invasion of the Olympics, most importantly, hockey. The Canadian women won last night (yay!) but the boys are still working on it....but I digress. Quick note....I will digress regularly just because I can't help it. Might be an attention disorder. ? In any matter, Food Inc. has me thinking again. uh oh.
About 9 years ago I stopped eating beef and most pork (sometimes I snuck a piece of bacon). The reason? a documentary that I watched one night about the factory production of beef in the United States and to get detailed it showed a hidden camera of a slaughtered cow on the assembly line which had been accidentally punctured in the abdomen by a factory worker. Well the puncture caused a large amount of urine and whatever other bodily fluids to spill out all over the assembly line and the floor. The camera then showed the factory worker clumsily mopping some of it up in a bucket and then bringing on the next cow. I was completely shocked and more completely grossed out. That was 1999. It wasn't until 2007 when we moved to Australia and went out to dinner one night to a very popular steak restaurant that I couldn't resist the aroma of steaks grilling and the constant bragging about Australian beef. Wow was it good! I'm not sure if it was the Australian beef or just the fact that I missed it and craved it. I haven't become a big beef eater since then but I have allowed a good restaurant to grill me a good steak on a rare occasion. Now tonight after watching Food Inc. I am facing another dilemma. The food industry is irresponsible and that's a fact but when we buy their product doesn't that make us irresponsible? I'm just not sure because my heart is seeing the chickens kicked around and the cows back legs giving out but my human instinct is telling me that these creatures are here for our consumption and my culinary abilities would hate to remove these most important ingredients from my dishes. Also...I love all chickens, baked, fried, roasted, slow cooked and fast cooked and replacing it would be a lot of work. Can I be that dedicated in my new cause or can I just convince myself that we Canadians have higher standards and our chickens, cows and pigs live happily here in the great North? What if I just buy the grass fed creatures? a lot to think about for now but tomorrow I promise a really good tofu recipe.
Posted by Michelle at 6:10 PM No comments:

Michelle
Canada
This is a blog about food, fitness and every day life as a mom and wife. I am a stay at home mom who has dabbled in the fitness industry over the last 7 years either cooking, counseling or training.